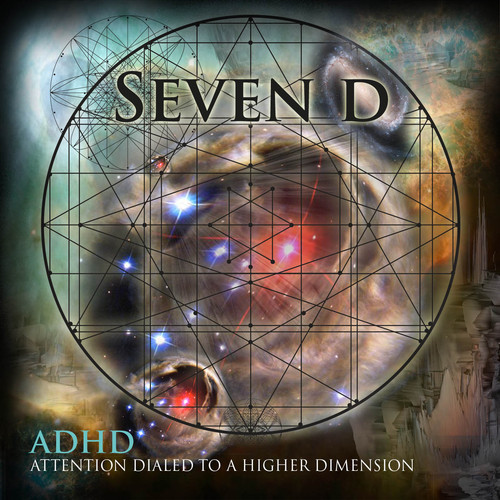 We first heard of Seven D when we were searching for songs to include in our Ethereality compilation and subsequently, the ‘System of Division’ struck the exact correct chords for the album.

A year on, it’s great to see ‘ADHD: Attention Dialed into a Higher Dimension’, a full length release from Seven D which encompasses what we loved about the previous offering as well as offering new flavours. The first track ‘Mutable Fire‘ is a perfect ethnic dub variant that oozes of soaring melodies and hypnotic ambiance. ‘The Beginning is Near‘ follows up from the first track and substitutes the earthy elements of the former with astro-scale falling synths, gritty bass design and a much more militant tone than the former. However it is still nice to see how well the balance is kept between the friendly melodic and aggressive dubstep elements.

‘ADHD‘ has completely different elements to the former two tracks, bringing the signature Seven D keyboard solos back into the mix over an innovative garage/step beat which is filled with creative drum fills and fx trickery. Some violin harmonies are also heard, adding a great additional tone to the track. ‘Lost Words‘ brings back the ethnic vibrancy felt in the first track but this time its riding a grittier dubstep beat that keeps you guessing how heavy things will really get. It is a multi-layered journey that chills you down as much as it energizes you; i.e. musical speed-balling, right here.

‘Drums of the Deep‘ takes the direction into the depths of forests with tribal ambiance and drums, snake-charming melodies and more. The humid nature of forests can be tracked to the wetness of the bass sounds in this one and the groove is sure to guide you through this tropical journey. If Drums of the Deep is the soundtrack battling animals in a dangerous Amazon-like forest, ‘Dreams of Enchantment‘ is the reward of serenity achieved after victory while sitting inside the back-wall of a waterfall. As lounge as it gets without losing the signature sound, this one is another revitalising jam on this album. Finally, the closer ‘Electric Universe‘ brings elements of trance synths, dubstep beats and wubs, keyboard solos and extra-terrestrial atmospherics to wrap this record up.

Overall, this is an aural mystic’s must-have as its evident from this release that not only Seven D knows what makes a good melody, but also knows how to switch a 7 song release up enough to keep it interesting but not lose authenticity; the experience of sharing the stage and playing with some of the best names in psydub/chill such as OTT and Bluetech can also be felt in ADHD, definitely deeming this release appropriate for live situations. Well done Seven D!

We first heard of Seven D when we were searching for songs to include in our Ethereality compilation and subsequently, the ‘System of Division’ struck the exact correct chords for the album. ADHD by Seven D A year on, it’s great to see ‘ADHD: Attention Dialed into a Higher Dimension’, ...