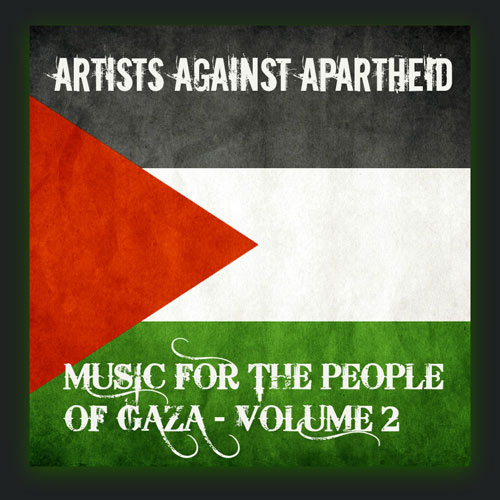 Ethnofusion #002: Artists Against Apartheid – Music for the People of Gaza (Vol.2)

You must be living in a Martian cave if you have not followed what is going on in Palestine / Israel in the past few weeks (or decades for that matter). While more and more people realize that this war is not that of religion and it is a product of forced occupation by a governing body that has much stronger say than the people it represents, every person on the internet with even the slightest shred of activism is helping to raise awareness about the situation. During the last few days, Muhammad Hamzah a.k.a music producer Celt Islam, the Cultural Director of the Association of British Muslims and the founder of Earth City Records has compiled a 16 track compilation under the title ‘Artists Against Apartheid‘ in a charitable effort and with all proceeds going to Muslim Aid, Medical Aid for Palestinians and sunshine4palestine.

What would our prophets say, to see us act this way?”

Other tracks featured on the album are the unexpected punk/rock offering from Follow The Lion, the orchestral/psychedelic electronica of Celestial Annihilation. Another highlight is the distorted guitar-driven psychedelic/industrial tune from Moseinko Project with the following Mario Savio quote:

Citizen Vex comes through with a highly experimental and slightly underproduced ‘Never Forget, Never Forgive!’, while Cheb Semnil‘s ‘The Midnight’ is another highlight from the album as it sees the Earth City Recs member bring that ethnotribal vibe to a polished mixture of 808 and psytrance which sounds oddly comfortable despite the muddy genre crossover territory. Dubzoic comes through with a banger dub titled ‘Mighty One’ which is definitely another highlight for this album.

“See i know change, if I see change, I embody change. All we do is change. Yea, I have changed. We’re born to change. […] regard it as a metaphor, reflects the way things ought to be, in fact change takes time. It exceeds all expectations. It requires both now and then. See, although the players change, the song remains the same and the truth is, you gotta have the balls to change”.

TiWadi delight with a presumably french hip-hop/dubstep track which frankly I cannot comment on (due to my insignificant knowledge in French). Our very own Mettakin also has a track here ‘Live Unity!’ which carries that authentic Mettakin psychill/dub sound. The Yalla Yallas come through with some serious taqwacore punk rock with the screamer chorus ‘Retaliation doesn’t make it alright’. Momoproject UK contributes an ethnolounge score, The Process come through with ‘The Fire is Burning’ which is an anthemic rise-up organic rock/reggae/hiphop dub that could well have come out from anywhere between the 60s to present. Nine Invisibles bring vintage synt-based melodic electronica to the table with Al Qods. Finally Jah Billah provides what feels like an 8-bit outro to the album to wrap up this 16-track collection.

While there are definitely some highly praised ethnic dub scores on this album such as Celt Islam, Cheb Semnil, Dubzoic and Mettakin’s contributions as well as Dawoud Kringle’s sitar beauty and The Process’s heartfelt anthem. It’s questionable whether all the tracks are produced to the innovative standard that we like to focus on. However, that is not the focus here. The focus is that these artists have all come out with quick, relevant and morally-driven outputs which are mainly based as awakeners for the real issue here: The Israel Apartheid of Palestine. This is clearly not a fad of capitalizing on current world issues to gain listeners as it is evident in the fact that Music for the People of Gaza (Vol.1) was released in 2011, a time when the world was not as concentrated or awakened enough on the atrocities happening in the region. Another praise-worthy note is that enough genres are covered in this collection to fit the taste of rockers, dubbers, bass-heads and world music enthusiasts. Props should also be given to Celt Islam for mastering these cross-genre selection album with a solid balance of volume and production. This indeed is the sound of reggae rockers uniting through the sound of equality and solidarity with those who may not have the voice for their struggles.

You can download the tracks from Artists Against Apartheid – Music for the People of Gaza (Vol.2) individually or as an album here with all proceedings going towards a charitable cause.

You must be living in a Martian cave if you have not followed what is going on in Palestine / Israel in the past few weeks (or decades for that matter). While more and more people realize that this war is not that of religion and it is a product of ...