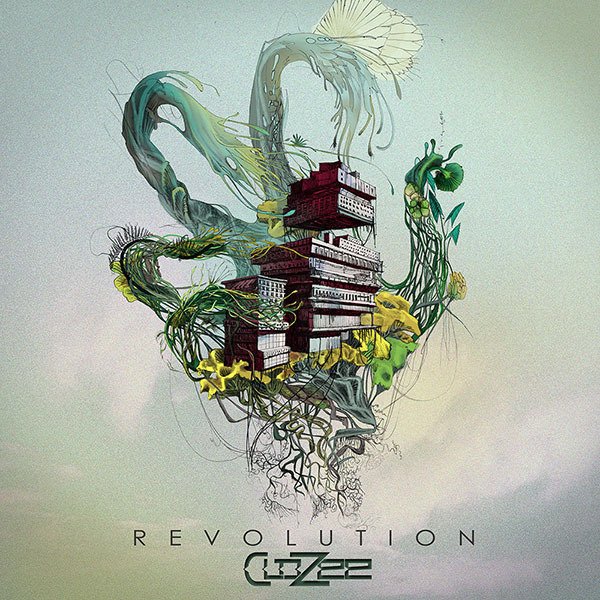 The Ethnofusion series are back with a review of Clozee’s brand new EP, Revolution on Gravitas Recording, as well as an overview of her previous work and gradual evolution into an ethnic hybrid maestro.

Hailing from France, Chloe Herry, more commonly known as CloZee is an artist who’s repertoire of cutting edge sound design has had a beautiful evolution across all future-thinking styles that are dear. Winner of the 2013 Glitch Hop Awards as ‘Best International Newcomer’, CloZee has had releases with glitch and future big dogs Gravitas Recordings, Glitch Hop Community, Waxhole Records, Digital Whomp & OTODAYO, as well as a large remix repertoire that beats most artists’ originals. Next to that and with her own huge following, CloZee is the kind of artist who self-releases a track and rakes 350k listens on her personal Soundcloud page in half a year; an example of this being the brilliant Dream Big, released this year:

The last year has seen CloZee move into the international scene with multiple Europe and North America tours, while still producing an impressive number of tracks and EPs.This brings us to her most recent offering, Revolution which was released as a free / name your price download yesterday.

Setting the tone as a brilliant intro track, Anticlimax assembles itself from scattered cosmic dust into a whirlwind of earthen wailing harmonies, intergalactic arpeggios, bound together through precise percussions and thumps of deep bass asteroids. Without imposing into your mood or becoming background, this is the sort of music that is equally up-tempo and downtempo.

The title track Revolution kicks in with a growing anthemic intro, slowly building an orchestra of sound, before descending into a mid-tempo medley of foleyful glory. Indistinguishable sounds of water drops, tablas, rainsticks and other natural chimes interact to create a splendorous atmosphere. The song is certainly the epitome of how CloZee has moved beyond the confines of glitch-hop, future bass, templestep, etc into a sound that is instantly recognizable as her own.

Third track Sankar’s Lake is perhaps an ode to the late Ravi Shankar, or other masters of Indian sitar aesthetics. Equal parts driven by laser-synths, sitars and intrinsic percussions which include the most convincing clap and finger-snapping sounds you’ll ever hear, this is one of those tracks that are perfect for running the final mile of a marathon or writing the conclusion of a research with its high levels of stamina and hope.

Aspara Calling follows the mood set in Sankar’s Lake, with a beat more similar to CloZee’s signature dream-hop sound as heard in past single release, Dream Big. Equally on the epic side of the spectrum as the previous tracks, the tribal aesthetic is ever-so present. This is sort of what the Mad Max soundtrack would sound like if the post-apocalyptic colonies were Burning Man attendees rather than warmongering oil-overlords.

Final track, The Path to Heaven doesn’t joke with the sort of introduction it presents. Giving off a more to-the-point and point-blank truth tone than the metaphysical vibe of the previous tracks, this track is definitely the darkest on the EP. Shamanic chanting is ever-so-present, accompanied with swirling violins, army style bass stomps, ghostly side-chain heavy melodies and hang-drum ambiance.

Overall, this EP is at the quality that modern ethnic and tribal influenced music should be. It’s safe to say that CloZee’s reign as a music powerhouse is only starting and she is emerging as arguably, if not confidently, the best current female glitch-hop / ethnofusion artist. With her own invented ‘dream-hop’ genre taking form and her generally positive, hopeful and motivating music, not only is CloZee’s music relevant, but it genuinely takes a great stab at being innovative; it is the sort of music that genuinely deserves being called ‘future’, while being firmly founded on strong ancient and tribal roots.

Major ups should also be presented to Lulu Swallow for creating the stunning cover artwork and to Gravitas Recording for being a courageous label that constantly puts out boundary-pushing electronic music. We had a few things to ask CloZee about this release and being herself in general. Read on to find out:

Q. At Outtallectuals, our main focus is fusion music, especially including world, and I was curious to know why you are interested in tribal / ethnic fusion music?

A. I love to feel transported to another country or world when i listen to some songs. It’s crazy how music can change your vision or experience. Ethnic and World fusion music make me feeling that, most particularly. I want the people to feel the same when they listen to my music, so i love to include instruments from all other the world, or space, nature sounds etc.

Q. Do you consider yourself a spiritual person?

A. If being a spiritual person means believing in god, or doing yoga, meditation etc, i would say that i’m not at all. But I do believe in the power of music and arts in general. It’s so amazing how the sound can make you feel awesome and help you to get through different situations of life. I meditate through music, i think about others when i make music. I also love nature and i’m including it into my tracks, so maybe i’m a spiritual person in a way. 🙂 haha

A. Everything. It can be a person, an experience, a picture, a track, a movie, a voyage etc.

Q. You make everything from glitchhop and future bass to ethnofusion. What makes you incorporate so many styles and types of sounds in your music?

A. I’d say i don’t do it on purpose. I probably love to incorporate different styles because I love and listen to every kind of music. When a track (of any style) is interesting, i feel very inspired and it influences me for my next tracks. Also, i don’t want my music to sound the same all the time and being categorized into one genre. I like to compose something that reflects my mood at the moment i’m writing the song.

Q. You might have been asked this before but do you sense any difference being a successful female producer in a field / scene that’s mostly dominated by male artists?

A, At the beginning, when i just started, it was so tough to being able to play my very first show. It’s horrible to say that, but that’s the truth: Most of the time, promoters don’t trust you as a female producer / DJ when you just want to start your carrier. They think because you’re a girl, you can’t have the headlining spot, or a good time slot: because they think you can’t play hard. So i’ve done a lot (too much) of warm up sets during shows (which can be cool at the beginning), even if my set was as catchy as the other DJs sometimes.

But now that i have a little bit more of recognition (in the USA, on the internet) thanks to remix contests, official remixes and opening sets for big artists, i feel more respected. I feel now that being a woman can be a power, an advantage, because we are just a few and it’s rare.

Q. Tell us about three underground artists who you think deserve to be known more.

A. Yaima: An incredible electronic folklore band i’ve had the chance to see playing at Enchanted Forest Festival in California. Their music clears my mind. Pepper Proud’s voice is one of the most beautiful voice i’ve ever heard.

Bwoy De Bhajan: i know he released a track with Outtallectuals so we’ll be agree that he really needs to be known more :). His melodies and sound design are incredible. I always discover new little details when i listen to his tracks again & again. So i never get tired of his music.
https://soundcloud.com/bwoydebhajan

Imagined Herbal Flows: i love everything he’s releasing. I’d say his music is like a mix of Bonobo x Flume x Fakear, It’s so fresh and beautiful.
https://soundcloud.com/imaginedherbalflows

Q. Finally, if you had the chance to convert someone to future ethnofusion music in one sentence, what would it be?

A. Listening to Future Ethnofusion music is a very easy and cheap way to travel around the world. 🙂

Thanks a lot for your time! 🙂

The Ethnofusion series are back with a review of Clozee’s brand new EP, Revolution on Gravitas Recording, as well as an overview of her previous work and gradual evolution into an ethnic hybrid maestro. Hailing from France, Chloe Herry, more commonly known as CloZee is an artist who’s repertoire of cutting ...