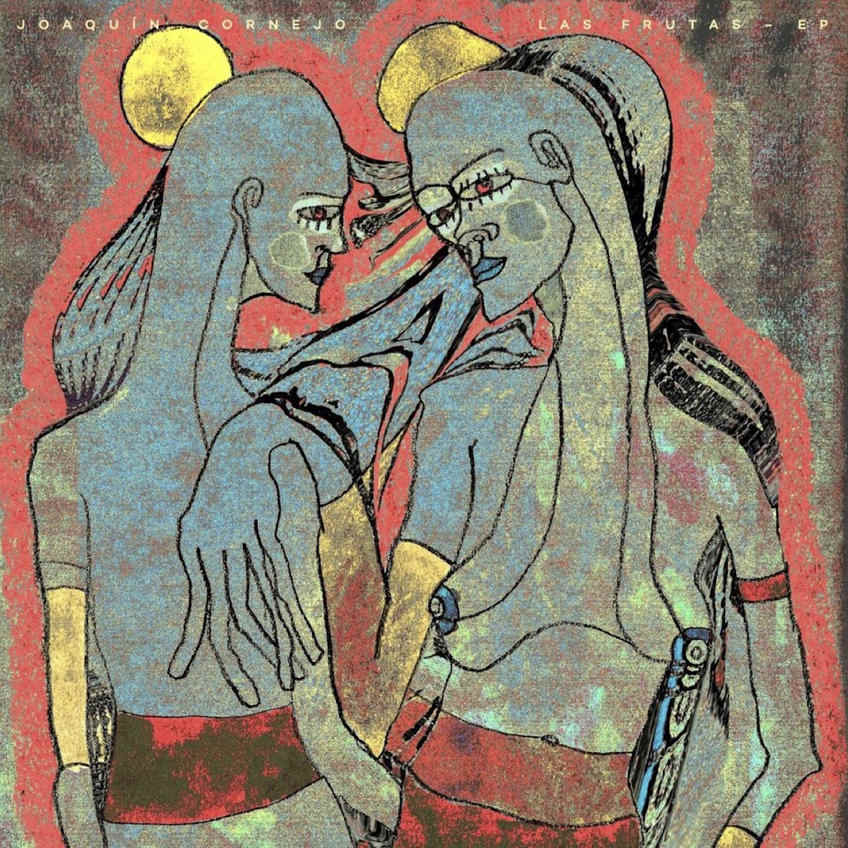 The EP kicks off with title track ‘Las Frutas’, a warm excursion of dubbed out chords and shuffling tape-delay sonics. The touching vocals from Spanish collaborator, Alex Serra, sit gently atop ethereal brass instruments and a wonderfully slow-paced groove. We love this calming and emotional opener.

Picking up the pace a little, ‘Spatial Request’ opens with vibrant tambora rhythms and dub chords firmly pushing the track forward. Vocal loops echo and drift through space and time in this cathartic and atmospheric banger.

Vinyl-only track ‘Dub En 3’ invokes wild polyrhythmia with the use of Ecuadorian percussion and lurching kick drum triplets. The blend of deep dub swells and wicked vocal stabs that dance alongside plucky synth keys give the track its uncompromising energy.

Aptly named ‘Shadow’ is the gloomiest track of the bunch and we love it. English singer-songwriter Wabi Sabi offers phantom vocals which are as unsettling as they are beautiful. Burial-esque stabs mutate through the glitchy underworld conveyed in this uptempo mover. The sunken poetry and reversed samples give this track a uniquely ghost-like disposition – Shadow stands as a real high point of the EP.

The EP closes with a ‘Vapor Mix’ version of the title track Las Frutas. Prior adherence to tempo and groove is replaced with a stunning collage of ambience and soft-tempered vocals. Tape hiss and dub chord drones fill the expanse and soak the pitched-down words from Alex Serra in limitless, dreamy texture. The rolling sub bass and fleeting brass sections give the closing track its emotive robustness – if only this track would never end.

‘Las Frutas’ EP is a brilliant, otherworldly excursion from the exciting Ecuadorian producer, we cannot wait to see what he’ll do next, but luckily, we were able to ask him some more questions about the project and also get a glimpse into the future:

Sean H: As your first vinyl release, ‘Las Frutas’, certainly feels like a significant moment in the continuum of exploration for which you are known – could you shed any light on how this 6-track EP came together?
Joaquin: I guess it just happened. I like the idea of not being too defined with what I do, I think of inspiration as an autonomous force, in the sense that I don’t actively choose what inspires me, it just sort of does and I like the idea of surrendering to that. During this particular time I was listening to a lot of dub techno, which I love due to it’s solid grooviness as well as it’s link to ambient music. In conjunction with that I was going through a big juke and jungle phase, maybe because of rave nostalgia during lockdown haha. And I guess this EP is fusion of my understanding of this styles in combination with the vibe that each artist I collaborated with brought into the picture.
S: Stylistically, it feels more brooding and dubbed-out than some of your previous work – how do you feel this EP compares to some of your earlier releases? Has your focus shifted at all?
J: It is quite different, I feel it’s another part of myself that showed up in this record haha. And yes, my focus tends to shift a lot. I don’t like the idea of defining my sound, at least not intentionally. If it happens naturally great, but it if doesn’t I don’t mind as long as I like the music.
S: Having lived in Manchester and Berlin, and now having returned to Ecuador, how has your location influenced your musical practice?
J: I guess it influences me in unconscious levels more than anything. Everything from the city where I am in or what the particular studio I am working on looks and feels like. I like the feeling of being new to places and not knowing anyone or anything and then gradually surround myself with people and spaces that inspire me and let that guide my musical practice in the way it wants to and I all I do is try to stay true to that.

S: In the past you’ve mentioned that your approach to writing new music is informed by the sort of stuff you ‘miss listening to’. Now, one year on from the start of a global pandemic, has the absence of live music affected your creative process?

J: Yeah it definitely has, although at the start it was pretty sad to suddenly stop playing live and not share the music directly with the people I feel that this process also made me more mature as an artist.

If there’s a positive side from the absence of live music I think is that it taught me to focus even more on the process of making music rather than in the function of it, which before was live gigs and parties I guess. Now I feel I am producing more freely, whether it’s fast footwork beats or tender ambient music I find myself more versatile in the studio and the whole process is becoming more loose and more rewarding on a personal level every time. Having the music and my studio during the pandemic helped me in ways I still can’t fully grasp, I feel very lucky.

S: Your live sets and DJ mixes, much like your productions, consider a vast palette of moods and tempos – have you always been grounded in eclecticism or were you initially more oriented towards one particular style of music when you started?

J: I have always had an eclectic approach to music, I don’t like repeating myself or defining what I do as I said before. At the beginning I thought I had to choose a certain style that would be “me” but then I realised it wasn’t necessary at all and that was very liberating.

I get excited easily about new sounds and rhythms and I want to learn more about them and have a go at doing my own version of a particular style. I am very easily influenced I guess haha. I think any genre or style can be great it’s all about learning how to embrace it in my opinion.

S: Are there any Ecuadorian musicians who have inspired you that we should be listening to?
J: Yes, there’s many. Check out Paramo Cumbié, Quixosis, FE, Nicola Cruz, Lascivio Bohemia, NTFL, Mala Fama and Cruzloma. All of them are super unique and creative.
S: With some luck, live events and festivals may return this year. What’s next for you, do you have any forthcoming projects we should get excited about?
J: My focus at the moment is finishing a lot of music I’ve been working on, there’s a few EPs on the way, some of them are very exciting collaborations with artists like El Buho, Simiah and Markandeya. Next up is a mini ambient EP I did recently which I think it’s one of my favourite things I’ve done hehe, that should be out in the next month or so.
Thanks.

Read about some of our favourite previous releases from Joaquin Cornejo on our Top World Fusion Picks of 2017, and our Top Discoveries in Dub for 2020.