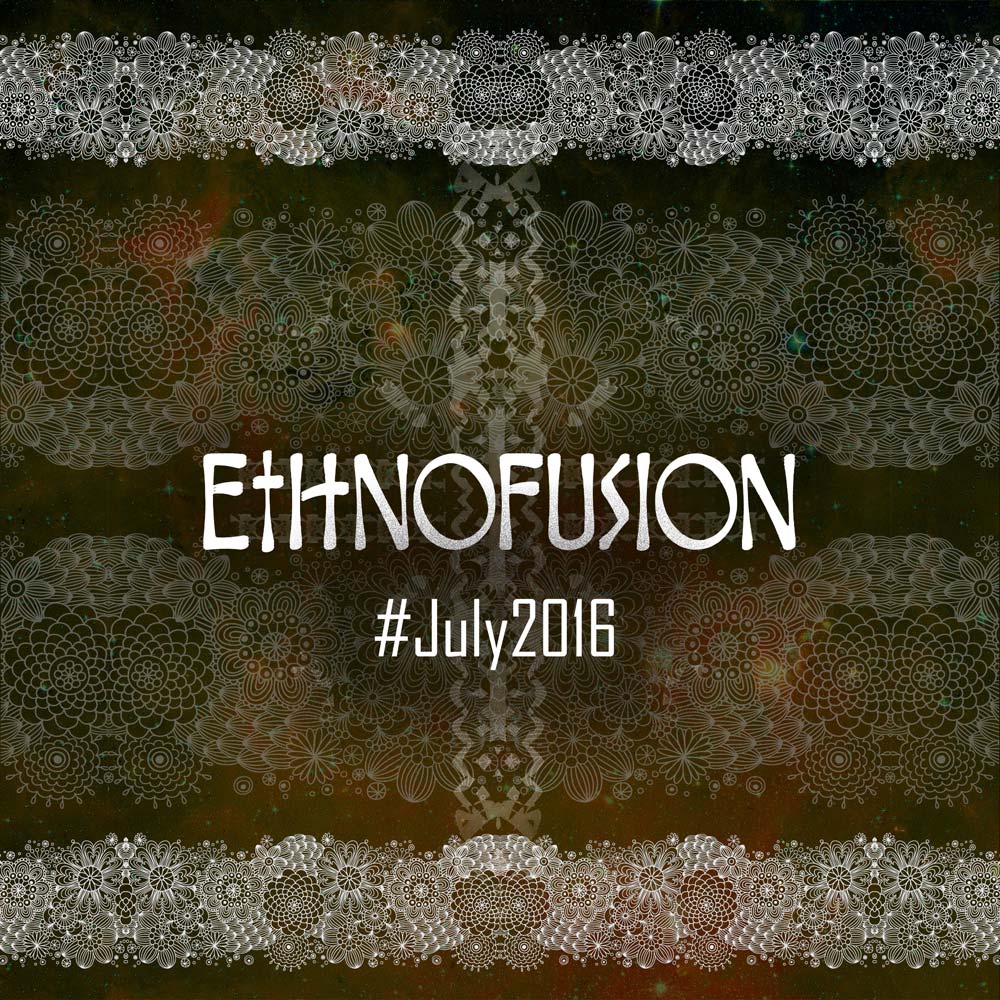 Outtallectuals is late with this month’s delivery of Ethnofusion picks for July due to the writer being away on the road in this seasonal high time of gigs and other nature-related outdoor goodness. Perhaps it’s not professional but it’s human so for anyone who might be pissed off for getting their fix 17 days late, we salute you and apologize for the inconvenience. Nonetheless, here are the previous month’s picks with jems including a hip-hop banger from A Tribe Called Red feat Yasiin Bey & Narcy, heavyweight tunes from Soltan and Kyra, genius beatwork from Jade Cicada, Skope and Loya, and some trappy goodness from CVRELESS, Aztek and more.

Jade Cicada’s usage of ‘bols’ from traditional Indian music (mnemonic syllables used to define the groove pattern) to construct this tune is an amazing display of creativity; a new way to bridge these musical words and it doesn’t stop there. The arrangement of the song is fairly genius and the production is very neat; displaying why he is such a sought-after mastering agent and producer in various sides of bass music. Arguable but likely one of the favourites for the best of this month.

We covered this song by DEFUNK some months back when it hit the airwaves and it was beyond exciting to know that there is a Skope remix to eat up now. Skope’s ability as a top-of-the-food-chain producer is inarguable and how he merges the tribal ethnic feel of this tune with vocoded reggae adlibs, heavy neuro bass and an overall ethereal Omni Temple-esque aesthetic is an ode to that. Definitely a sort of heavy breather to consider for the dancefloor.

Compiled by none other than the mighty Desert Dwellers and released through the Sofa Beats artist management / label, The Clear Path is as heavyweight as psydub VAs come. With music from themselves, Kalya Scintilla, Whitebear, AtYyA, Tribone, Sixis, Land Switcher, Kaminada, Mumukshu, WolfTech, Dimmat and Birds of Paradise, you have Merkaba, Shanti Planti and Ovnimoon representation to rhythmically blink your third eye to. The whole VA makes for great mid & downtempo psychedelica and the standout moments include Tribone’s Gnosis, portraying his next level sound design, the Dwellers own Saraswati’s Twerkaba (bangin title there) with that spiritual trappy soul twerk.

Austin, TX producer and various scene-giant labels’ associate, DRRTYWULVZ hits out this month with this psydub score coming with an ethnic gangsta roots flavour. The Black Hole resonance gravitates without compassion and a streetwise scientific approach is needed to navigate through this future ancient time-travelling portal.

Out as the first track from Native Canadian group, A Tribe Called Red’s forthcoming album, ‘Halluci Nation’, R.E.D features arguably one of the most conscious and important MCs in hip-hop, Yasiin Bey, as well as Canadian-Iraqi heavyweight, Narcy and native American drum group Black Bear. What this results in is an incredible blend of purposeful activism, A-grade MCing, and beautiful tribal chanting and drumming. This is exactly the kind of aural experience that is beyond electronic, dance and music in terms of its message, execution and organicism and it is most definitely (pun intended) what should regularly be encouraged within the music industry.

The rise of Renraku as the Captain Planet of underground neuro producers, each with their own elemental rings, has inevitably led to the Heatwave Communications ??? compilation which has enough neuro goodness in it to feed neural activity to bass mongrels of all kinds. Inside this package, there was this unexpected ethnofusion gem from Kyra, creating a ridiculously heavy, gritty and fun rendition of Bollywood music. Neurobolly perhaps? Whatever you wanna call it, this is one of the top 5 tunes of the month, no doubt.

French beatmaker LiL Fish comes out with his first album, appropriately titled ‘Fusion’, mixing a blend of hip-hop instrumentals and world bass aesthetics. There are a number of high quality previously Ethnofusion featured collaborators here, namely CloZinger & Arure, but the album does not depend on such collaborations to shine. Considering most of this music has been executed to be played live, there’s less emphasis on tech-jerky sound design, and more on groove and multi-layered beatsmithery. As a result, here are 8 tracks that will most certainly meet your whirling desires.

Aftro-electronic label Mawimbi (home to Pouvoirmagique) is out with another release, keeping true to the authentic psychedelic polyrhythmic sound of the label. Labelled to be “blending ghetto house, modern highlife and shamanic techno” is a precise description of this music and with the ethos of spreading this timeless form of music and multicultural attitude across the globe gives even higher value to this music beyond its aural pleasure.

Another slowly progressing and evolving snakey sandtempo scorpion house tune to accompany you in your most hypnotic dream-ladden stargazing desert adventures. The multi-layered percussion work, instrumentations and the majorly dub-delayed vocals create a very holistic and nutritious soundscape, slowly evolving to a crescendo and steadily down to resolution in just over 9 minutes, and bringing Iorie on our map of downtempo artists to look out for in the long run.

‘Palang Kuh’ is a rural village in the Lorestan Province of Iran within the Zagros mountain range, with ‘Palang’ meaning Leopard, ‘Kuh’ meaning mountain and the artist being called Birds of Mind, this song paints an image of a soaring Eagle’s perspective as it floats atop this serene highland landscape, looking down at the haunting contrasting reality of survival on the ground in the presence of the mammal and the freedom in the air while in flight; a sombre dreamlike sobering perspective.

Self-confessed as ‘multifolk’ music, this description of Estray & Stanisha’s collaborative LP isn’t that far from the truth. Wandering between the 115 and 130 regions of haunting progressive tech house with an old school flavour but new school execution, the LP serves very well as single tracks or continuous play. While being dense, packed full with non-stop changing grooves, the overall melody and continuity is preserved throughout the album; no groove trolling or sucker-punch breaks, only a continuously noddable journey of acceptance and appreciation.

Jota Karloza’s offering this month has a very distinct lo-fi vibe to it, almost feeling like how a song would sound like if we were only able to catch an echo of it through a not-so-advanced time travel device. There’s a sense of wandering harmony here that it exactly at the opposite end of the ‘banger’ rise & drop composition style and this serves well for easy-listening non-invasive tribal goodness.

CVRELESS hits back with this dark hindi trap joint that brings an appreciated organic touch to the overly synthetic genre, also introducing well times chimes, background ghostly ambiance and engaging foley. Overall, there are many variations to the groove, production is slick and despite the hooks being slightly repetitive, it can be a super fun track to play live and go ham with effects.

Another tribal deep trap banger for worshipers at the shamanic 808 cvlt with a deep lo-fi hip-hop vibe to carry you and your squad down the jungle walk as you kill vermin with bow & Wessons. Similar to the CVRELESS one above, it is something to consider for live DJ sets if you know how to merk up a repetitive 16 bar with your live manipulation. Most tunes on this EP have that post-trap Troyboi-esque bouncy poly-rhythmic thump with ethnic flutes adding that extra standout flavor to it at times, making it relevant to this blog.

Starting with a blend of elephant sounds and wailing female vocals, this tune from KRYPTIX is an interesting form of trapstep, almost sounding like it is majorly composed of animal sounds put in a banger trap composition, with the occasional high trill lead synth at points to bring that familiar sound of this genre. Not the most unique tune out there and nowhere near the same production level of Soltan’s below-mentioned EP, but certainly something to satisfy your ethnic bangerstep vibes.

With a sound to blow the lid of every volcano on earth just so that we can embrace how much more FYAH this track is than molten lava, Soltan’s Jadugar (meaning Magician in Persian), is ethnic trapstep gold. There are so many interesting fills, interesting eastern scales & adlibs, hitting every needed aesthetic in this style right in the gutter. Specifically Bang Bazzar (with the help of Spag Heddy) & Balkan’s Hammer are highlights in the EP, taking a perfect blend of Dr P & Beats Antique in a bastard Balkan child package.

Outtallectuals is late with this month’s delivery of Ethnofusion picks for July due to the writer being away on the road in this seasonal high time of gigs and other nature-related outdoor goodness. Perhaps it’s not professional but it’s human so for anyone who might be pissed off for getting ...