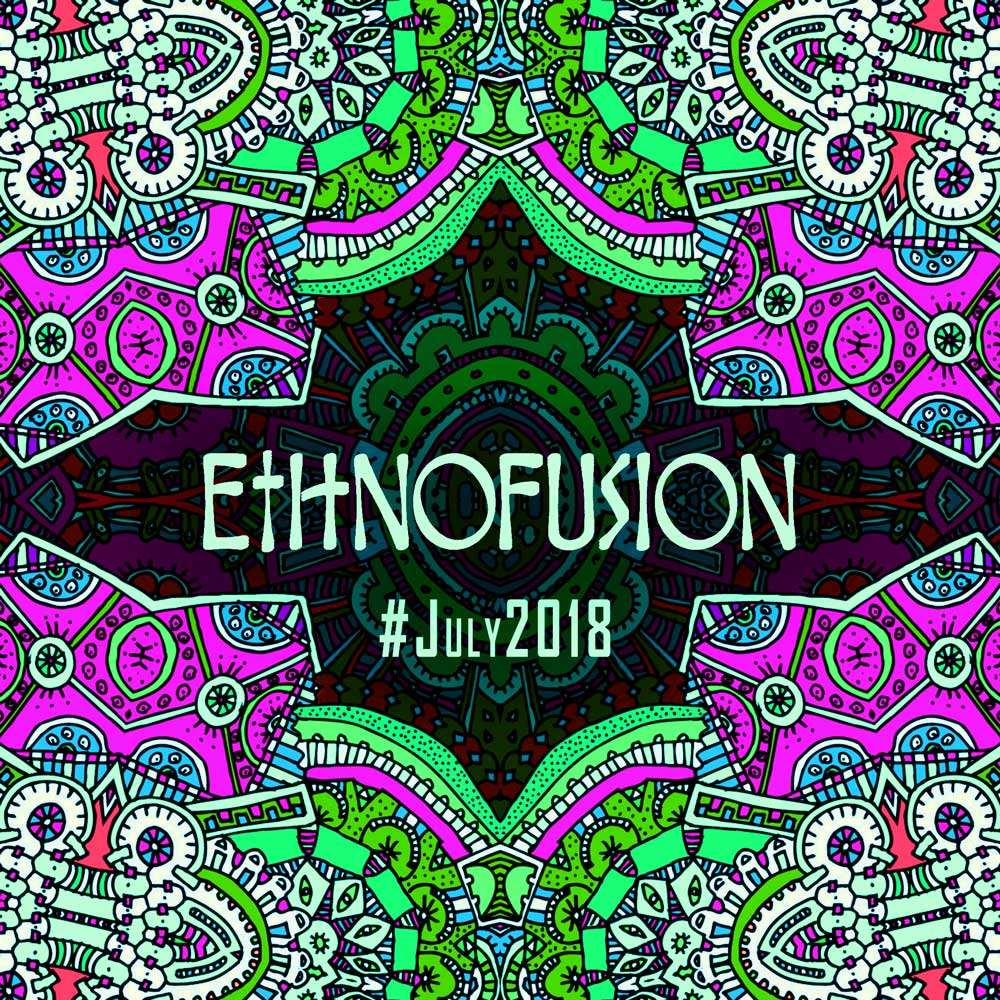 It is also worth mentioning that in the coming months, Ethnofusion is likely to undergo major changes as I aim to roll with the times while we enter the 4th year of this discovery platform. You will already see the removal of our rating system which has served me well over a year, helping to identify what I value in music. At this point, I believe that many points are simply repeating themselves and its counter-productive to revisit them in great detail every time. This blog’s word count has exceeded 110,000 words while the appeal of written content has decreased significantly in the past few years and we also made new promo partners in the audiovisual realms. Along these lines, it’s exciting to evolve this project and I thank anyone who’s enjoyed this blog as much as I have spending my time discovering the music for you.

Govinda returns with a mighty single in his signature violin-driven sound, tackling the more emotive and ethereal realms of psybass music. Based around the theme of elves, specifically the neon-coloured fairy-tale female type, the song is equally graceful, squelchy and luscious. Certainly, one to embrace if you’re searching for the soundtrack of your meeting with Eowyn under a rosewaterfall at dusk.

Most people who are tuned into the more mainstream realms of alternative pop will have heard of Sevdaliza by now; the Iran-born Dutch singer whose sensual and often conceptual brand of electronic r&b / trip-hop has gained traction in the past couple of years. With this new music video, Sevdaliza, directed by Emmanuel Adjei, the artists tap into the Iranian/Near Eastern myth of Shahmaran; a story and also location in Iran with numerous interpretations, directly translating to ‘king serpents’.

With a clear Eastern feel and a James Bond meets Bjork quality, the song channels a captivating avant-garde and cinematic aesthetic as it uncovers the tale of oases, yearning for water and all other vices one alludes towards when not focusing on such primary necessities of life.

Overall, this is a brilliant visual, conceptual and sonic treat, and we suggest you watch it for yourself and read the many YouTube comments which try to decipher the song’s meanings.

‘Rajasthan In Dub’ EP is our latest release over at Outtallectuals, and it is a collaboration between Outta artist, Lo.Renzo, NicolòMelocchi, an Italian student of Hindustani music, & Asha Sapera, a dancer & singer from the Kalbeliya tribe of Rajasthan.

Primarily, this EP is the culmination of Nicolò’s time spent living with the musical tribes of Jodhpur in the past few years, training in local music & instruments. During this time, Nico has built a solid relationship with various members of the Kalbeliya tribe, a community whose dance & folks songs are included in UNESCO’s “List of Intangible Cultures”,& this relationship has included documenting videos & songs with Asha Sapera, one of the key internationally-renowned faces of the tribe.

Combining with the ethnofusion musical capabilities of Lo.Renzo as an electronic producer & player of the Sarangi, Cumbus & Percussions, the recordings of Nico & Asha have developed into this novel collection of songs. Traditional sounds of Rajasthan merge with world dub aesthetics & subtle overtones of psychedelic music to create ‘Lhwar Jewra’ & ‘Beraghi’, two songs with the main lyrical theme of love & separation as expressed from the perspective of such nomadic people who must often leave their loved ones behind, departing without the knowledge of their next exact destination.

Egoless delivers a heavy belter ethnostep tune through Youngsta’s label, Sentry, bringing the crunk snake-charming Middle Eastern vibes to the 140 heads. There’s a certain level of harmonic balance in these tunes which moves beyond the usual dubstep producer’s use of a simple ethnic sample to drive the tune, and you can hear this in the way each section of the song is composed, with evolving passages, string accentuations and flute hooks spicing this tune beyond the average.

Celebrating the 2K mark as a label, the Slovenian DeepEnd! Movement give us a 7-track compilation which highlights their collective’s dark and twisted brand of deep tribal dubstep. There’s a certain eerie gracefulness to these tracks which make them stand out, and this can in part be attributed to the black and white aesthetic that the crew rocks. Artists like FLO, Gisaza and RawLand literally dive in the deepest end of the bass spectrum, and with songs like Vipress, I can easily say that DeepEnd! is the most exciting deep dark tribal dubstep label I’ve listened to this year.

Those who remember Skope’s critically-acclaimed Nordic EP back in 2015 will remember the Part 1 to this track which sees a syndicated comeback three years later. Fusing epic guitars, hip-hop grooves and techy neuro basslines, Spaniard Pt.2 hits equally as hard as the original. Fans of melodic yet heavy beats with a Bristolian twist, this one’s for you.

The legendary Voodoohop collective who have played a vital role in transforming the South America-inspired downtempo scene release their latest compilation, getting together some of the blog’s favourite names and more. Opening with the brilliantly atmospheric and delicate production by Peter Power, the compilation explores peaceful nature-inspired rhythms, and we see one of our downtempo favourites, Gama also makes an appearance collaborating with Urubu Marinka. There’s a snail-trail psychedelic aesthetic present all throughout this compilation which makes it stand out from other releases in the genre, almost venturing out into pure sound art territory at points. It is certainly refreshing to see such wild compositions being explored and it comes as no surprise that its spearheaded by a trendsetting crew/label.

Channeling the ambassadorship of Andean culture through downtempo electronic music, Deela brings us Sundance; a 7-track EP which treks from the mountain-top rural realms towards the urban-scape throughout its progression. Setting the tone with the opening track, Sacred Chant, and picking up the pace with Seeds, the forest atmospheres and Andean instruments are brilliantly utilised in rich, fluid and textured compositions, and in an increase of pace, the songs present different manifestations of this meeting of worlds. Overall, the EP’s collection of songs bridges the worlds of cumbia, trip-hop, ambient, dub, downtechno, dancehall and moombahton in a highly cohesive package, wrapped together elegantly with a ribbon of Andean music.

WONDERWHEEL Recordings give us one of their signature organic-sounding ethnofusion EPs in the form of Randomized Coffee’s 2-tracker, exploring instrumental afro house vibes. Both tracks utilise live horns, an orchestra of percussive elements, funky guitars and a lively carnival feeling which helps to remove the physical separation from where the music was recorded. Simply close your eyes, and imagine yourself amongst a huge happy crowd of people enjoying the ocean breeze over a desert-side beachline.

One of our all-time favourites, Amin Payne launches his side project, Teymori, focusing on the more housey and uptempo sides of world music while featuring a wealth of respected Oceanian musicians in the process. The project brings the funk like most of his previous work with live bass, Rhodes, synths, trumpets, vocals and percussions topping up his well-regarded MPC skills. There are samples throughout this taken from numerous cultures, namely on Sekondi and Valley of Peace, but the music is much more than just a couple of ethnic samples, often reminding us of artists like Thundercat, Yussef Kamaal and the like.

Absolutely recommend this EP for those “grown-up vibes”.

DJ Captain Planet’s latest offering is a 45-minute journey around the planet, bringing a very pragmatic meaning to the ‘Global Bass’ genre. Spearheaded with the ethos of finding obscure global vinyls and tapes, recording field sounds around the planet, chopping and flipping sounds and taking the production and distribution back to the 90s, the album makes for an incredibly mature listen and at times it reminds us of sampling dons such as Amin Payne, Den Sorte Skole and Grup Ses.

If you are after 45 minutes of unadulterated funky and vintage-tasting global melodies, manifested through hip-hop, funk, soul and global underground vibes, this is the stuff. Definitely fitting of the title, Captain Planet, right?

Brazilian post-baile weirdness wizard, JLZ gave us a new EP last month which included this score titled Curva, and there’s something about that groove which got me. Simple, moody, hard-hitting and unconventional, it’s exactly the kind of experimental beat one hopes in a free download 4-tracker beat tape. Watch out for the Super Mario level up sounds!

Another fast carnival score with a Jersey Club banger vibe comes from Mansa ’91 and Casement, and as far as summer bangers in the tropics go, this is a must have. Sweaty people, ice cooler boxes, grooves on a frying pan and a trash can with cutlery, and a football flying around are just some ingredients I can think of the kind of party you’ll need this tune at.

Ending this month’s features on a fun and happy note, Nina Las Vegas and Ninajirachi give us this future bass-tinged score, topped off with a catchy flute hook and bubbly chords overall. If you’re after the high-energy footwork/dancehall-influenced hard-hitting positive vibes, this is the one for you.