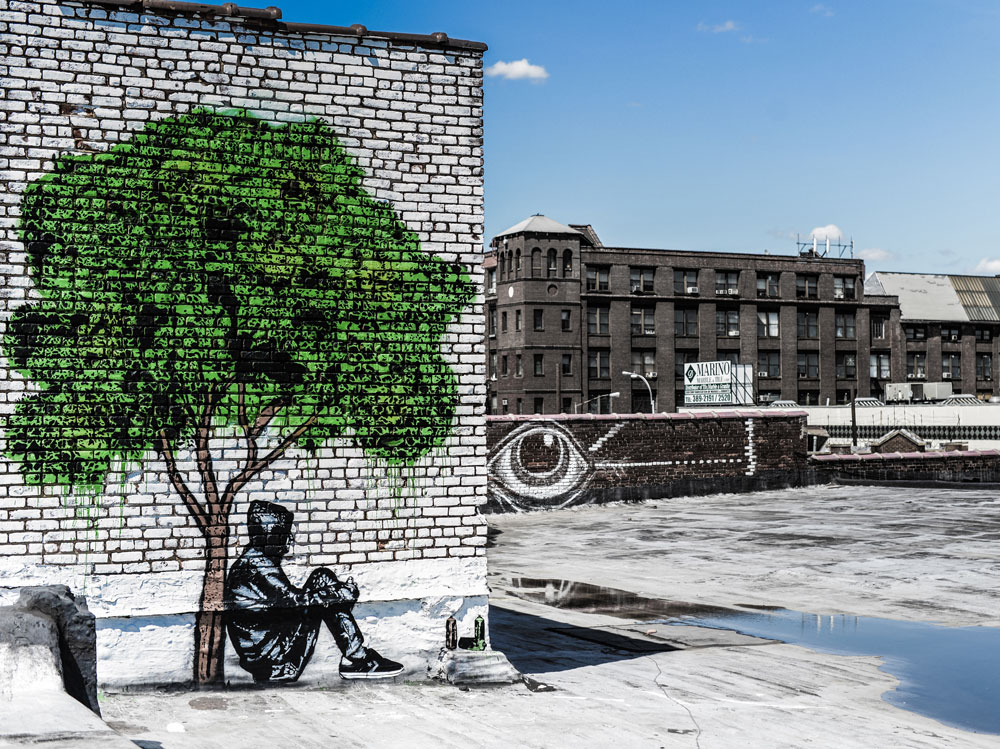 An Afternoon with Icy and Sot

The Brooklyn based Iranian stencil artists Icy and Sot started to get involved with this form of art 7 years ago in Tabriz, Iran where they put small stickers and stencils in skate spots with no plans to pursue these actions as a career. Over time they became increasingly involved with street art as they began to meet other artists who inspired their work and began to follow well established artists like Dolk and M-City.

I happened to be in New York visiting some old friends and was fortunate enough to have the opportunity to meet Icy (28) and Sot (22). Our afternoon together began with a walk around their rooftop gallery and home studio. It wasn’t too far into the conversation when I realized they must be men of few words but many talents. After hanging out in their apartment for a while we went outside to look at their pieces around Brooklyn. In the middle of the walk we stopped for a skate break; Sot was doing some pretty hefty tricks and Icy was calmly filming him. Although I only spent an afternoon with them, I think it’s fair to say that beyond being brothers that happen to be artists they are multitalented best friends who have the ability to project their nearly telepathic visions through consistent teamwork and dedication.

When Icy and Sot really kicked off as artists they mostly got their inspiration from what was going on around them, using the innocence of children to enforce messages of peace and human rights. The images Icy and Sot create project emotions that most people can relate to in one way or another. ‘People usually have pretty good reactions to our work because it is simple and clear. Sometimes they have a better idea of the meaning than we do’ — Sot

The brothers rarely argue about their art; they say they understand each other’s vision and it’s easy for them to put their ideas into form. They produce as much as they can in a little room with a bunk bed. Icy and Sot understand each other on the next level and are accustomed to working as a duo since they didn’t always have friends with whom they could collaborate. Their talent, close relationship and motivation to do something unique have structured them to become a very quick and efficient duo.

No matter where they put up a piece, it’s always possible that the brothers will find it painted over just hours after completing it. They made more pieces back in Iran than they have (so far) in New York, but none of them exist anymore. Back in Iran someone was always keeping an eye out for ‘ill moral’ actions, and punishment depended on who caught them and what messages authorities assumed Icy and Sot were trying to send out (such as messages of satanism or politics). Now, in New York where street art is much more popular and the people enjoy more freedom of expression, the brothers have still needed to familiarize themselves with the anti graffiti task force — so they still try to stay within the confines of strict New York graffiti law as much as possible.

Selling merchandise such as prints and being hired by other people to paint a designated area are ways which the brothers find themselves working legally. Along with a few other artists they know, Icy and Sot have also turned their own rooftop into an exclusive concrete gallery. For the foreseeable future, they are looking forward to getting their green cards and being able to enjoy the privileges and work experiences that will follow. In the meantime they are planning collaborative pieces with fellow artists whose works are not pictured here. However, judging by the collection of styles that I personally saw on their wonderland of a rooftop I’m sure this collaboration is something for the interested public to look forward to.

The Brooklyn based Iranian stencil artists Icy and Sot started to get involved with this form of art 7 years ago in Tabriz, Iran where they put small stickers and stencils in skate spots with no plans to pursue these actions as a career. Over time they became increasingly involved ...