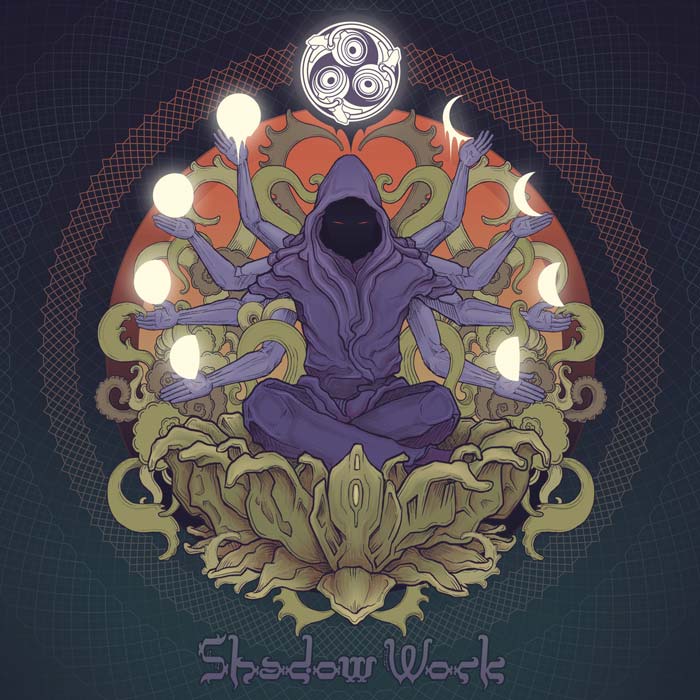 Re-embracing our search of the omni-dimensional, this blogging section is back with a special review of an artist whose soundsmith skills have consistently cut the edge of innovation and who is back with a new ultimate full length; we unravel ‘Shadow Work‘ by Shamanic Technology.

I pledged to support Shamanic Technology’s latest album many months ago and after hearing the previews on Soundcloud, I knew it was the right decision. Rolling on some months, I received the album and I did not touch it until this moment, travelling on a bus in Nepal; a moment where I can hear this full album without interruption and/or any major idea of what this 1.5 hour 22 track album sounds like.

The album opens with ‘The Day I Saw The World‘ a tale of celestial saudade as voiced by Emily Kell and harmonized by Mr Shamanic; it’s the sort of stuff that would otherwise be considered closure yet it sets the tone for a message of acceptance, serenity and pragmatic life views to unfold throughout the album’s journey.

The second track roundhouse kicks into the straight Kong Fu glitchhop/house crossover of Glow Worm with plenty of blips and blobs providing the balancing grit of a highly charged opening part, before breaking down into ethereal melodies created by side-chained basslines, bells and strings. It’s the sort of stuff you want to be listening to when positioned on the edge of the Dreamworks half-full moon logo.  Immediately, a storm surges, covering the moon with overcast shades and we are taken to Cloud Powder, which appropriately takes things into a vapour-esque future garage realm while maintaining a highly neurotic and digital aesthetic akin to Shamanic Technology’s familiar sound. With beautiful continuity, the journey continues into Kenjutsu which is another ethereal neuro garage score with plenty of chimes, ghostly vocals and other blips painting a rich soundscape. Things get pretty insane with the liquid organic IDM neuro tech jungle footwork of the title song, Shadow Work, making it the most impressive composition on the album so far. The song literally slices all sort of genre definitions with its proclaimed Shaolin-style Wu-Tang sword, an element heard in many of the tracks so far, especially through the swooshes and reverse snares here and there sounding like or actually being swung kitanas. The kind of polyrhythms rocked on this one really characterize the kind of madness Shamanic Technology is capable of that many producers couldn’t even imagine in their most narcotic-laced dreams.

Moving onto somewhat of a descent, Hour Glass takes things into a jazzy steppy realm utilizing immaculate drum work and harmonies; with bell harmonies, ethnic flutes and synths filling the few gaps remaining in the medley of percussive sounds. Remaining in the 140/70 territory, Our Future Lives appropriately sounds even more futuristic than the other tracks with its plentiful use of wandering wubs, before exploding into another genre-buster banger towards the second half and slowly dissipating into low intensity regions again. The pace is immediately taken back up in a similar composition for Sky of Signs and plateaued into a next level fusion of beats, dial-up connection sounds and musical serendipity moments. This is the sort of music you listen to when star-gazing and travelling at the speed of light at the same time; or when establishing broadcasting connection for the first ever comet-riding competition to intergalactic species.

With help from Lonedrum, next up is ‘I Miss You‘ which so far stands out in the album for its melodic composition and utilization of what sounds like a hang drum while lasers and alien reel-up fxes bring their own foot soldier capabilities to this war of melodies and the new element of scratching is introduced into the mix.

After the short interlude of Here I Am which reminds the listeners that ‘style is a crystallization, and in that way it is a process of continued growth’, the first released track from the album, Cannon Fist is up, being further ode to the Shaolin style and will certainly have you either ninja-kicking the next poor man in the mosh pit, or have you tip-toeing a moonwalk on the edge of a sword. Definitely the grooviest tune on the album so far and the martial arts bass madness that it offers leads to some sort of death as is portrayed in the dualistic interlude of A Game of Life and Death and carried into At Last I Sleep. The song is caught somewhere in purgatory seeming as a conflict between the desire to seek never-ending peace or carry on the fight to stay awake. The whole thing has this cybeneticstep vibe of wubs and vocoders, topped with an operatic aesthetic.

Next up, the dictionary is whipped out to understand the title, ‘Neophyte‘; a person who is new to a subject or activity. With rapping help from Clarity, this one serves almost as an instruction to living (especially as a result of its place in the tracklisting) after escaping that purgatory. It’s a pretty amazing lyrical track and the closest the album comes to full-on hip-hop.

With Trigram acting as yet another mood-setting interlude, the album’s unique cyber jazzhop sound is brought out again with Cellular Circuitry, which as the title suggests, has a perfect balance of organic matter and electromagnetic waves. Similar to the next track Chidorian and many other songs on this album, this is pretty much as classy as heavy glitch-hop can get, and given that your date is an AI, it’s the most likely kind of neurohop you’ll ever play at your candlelit dinner.

Moving on, Universal Connectivity is another arpeggio-ladden gritty glitch-hop score which arguably fails to stand out amongst other greats in the album but it is followed with Towers which shines out the same kind of class mentioned in the previous paragraph. It’s an unholy alliance of dubstep, cyberwave, jazz, glitch and thrilling string music.

Starting with a brilliant intro, Return to the Void immediately makes itself known as a song on the album to be reckoned with. Kicking straight from ambient into intense footwork, this is what uzis would sound like if bullets were clones of Salvatore Dali. Showing off the effortless switch-ups, the song descends again into blissful half and quarter time piano-ladden zen tactics, before picking up full force into the void.

Acting as the last of many interludes, Plot Twist is another reminder that this isn’t simply just E.D.M; it’s at least E.F.J.M (electronic future jazz music) and it’s the product of what great minds think like in 2016. This brings us to the final track on the album, Bloom which lowers the energy levels on an outro note and ends this journey which at most times sounds like a Mad Max episode in space where only Yogi Robots have survived the apocalypse.

The overall sound is extremely high definition with every sound engulfing the sphere or the mindspace, even if listened to on mono. Throughout, an overall aesthetic can be sensed and traced back to the region where Shamanic Technology and many torch-bearers of this musical style i.e. Culprate & KOAN Sound hail from; the South West of UK. Despite having a different sound, there is a lot of parallels that can be drawn between this album and Culprate’s Deliverence, mostly visible in the intensely detailed drumwork and placing of sounds in a well-panned soundscape. This vision set forth by such artists and specifically Shamanic Technology continues to bear the torch of an alternative electronic music reality where creativity stands tall on the top beacon of the pyramid of criteria.

You can find Shamanic Technology on his website, Facebook, Soundcloud and Twitter. The Special Edition of ‘Shadow Work’ is now available on Bandcamp, with an official release incoming in Summer 2016 on all major download stores.

Re-embracing our search of the omni-dimensional, this blogging section is back with a special review of an artist whose soundsmith skills have consistently cut the edge of innovation and who is back with a new ultimate full length; we unravel ‘Shadow Work‘ by Shamanic Technology. I pledged to support Shamanic ...