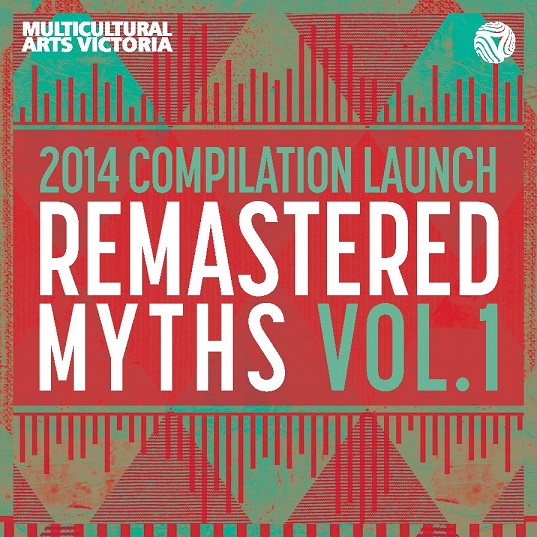 As far as instrumental hip-hop / drum machine goodness is concerned, Amin Payne has been in our focus for more than a year. After featuring his track ‘The World Changes’ on Ethereality Vol.2, we have witnessed the artist move into roots-based territories with his fusion of instrumental hip-hop and traditional Iranian music. The first of these experimentations were in the form of a live fusion performance with Mehr Ensemble (video of performance here). Organized by Multicultural Arts Victoria, this event which happened in June 2014 was materialised in the form of a short compilation entitled ‘ReMastered Myths’ and was released on 16th of October.

The following official statement depicts the idea behind this project:

The first track of the collection starts with an odd yet pleasing mixture of Middle Eastern samples and an excerpt from Surat Al-Asra’ the Quran:

“And your Lord has commanded that you shall not serve (any) but Him, and goodness to your parents. If either of both of them reach old age with you, say not to them (so much as) “Ugh” nor chide them, and speak to them a generous word.

And make yourself submissively gentle to them with compassion and say: O my Lord! Have compassion on them, as they brought me up (when I was) little.”

This Islamic parental praise is then continued into an English spoken word by Abdul Hammoud, a poet from Melbourne’s Sikh and Muslim community. The poetry utilizes a story-telling narrative to paint a vivid picture of mother and father, and child bonding. This “song” or melodic spoken-word piece is an excellent blend of modern and religious tongue to glorify one rightful thing: the love for parents.

The second track ‘Soofi‘ brings Amin, Mehr Ensemble and rapper Cazeaux O.S.L.O into the frame. The whole dynamic of this track is amazing. Cazeaux O.S.L.O’s flow is reminiscent of Del the Funky Homosapien and there is a unique balance of Iranian roots, digital drums and American hip-hop which exemplifies a sort of cooperation the UN and government officials could only dream of. There is an echo of works by Iranian rappers such as Reveal, Hichkas and Simorgh Band, and how they have successfully built a bridge between the historical grandeur of Iranian music and modern urban struggles.

Third track ‘Just Another Day‘ is another ambient spoken-word collaboration between Common Ground Collective (CGC), L-Fresh the LION and Cazeaux O.S.L.O. This one is a highly militant yet peaceful work based around the spiritual and physical struggle and the fallen soldiers that it leaves behind. The poem in this track is line by line filled with quotable and it is my duty to recite some of them here:

“It’s a necessity to be, the best we can be,
Together we achieve, intertwined in moments of need,
Determined to proceed with our mentality to focus,
No trace of fear, even when the threat of death approaches us..”

“So the let the story be told through the eyes of a soldier,
Born into this life in an attempt to reach composure,
Take a look at our history and be proud to say,
That you are a warrior saint whose people fought just to live another day.
Many sacrifices made yet death is nothing we fear,
To reach tranquility we were made to persevere.
Put a smile on your face, put your hands together and pray
Remember those who fought for us and fought just to live another day…
Just another day…”

Fourth track ‘Kurdish Tribal‘ is another Amin x Mehr collaboration and it is a progressive 7 minute track. After a 2 minute slow build, energy levels are raised with the sound of Daf and Farsi vocals singing a famous Hafiz poem from his Ghazalyat:

[I said, “I suffer because of you.” She said, “Your suffering will end.”
I said, “Become my moon.” She said, “If it comes to pass.”
I said, “From lovers learn the custom of loyalty.”
She said, “Among the (pretty) moon-faced ones, this is rarely found.] [Translation by Sulayman Ibn Qiddees]

The tribal element in this track is incredibly organic and the balance of traditional instruments and drum-machine groovery is well achieved. This is the sort of music that defies the second by second progression, over shadowing the passing of time with its timeless aesthetic.

The final and fifth track brings out the Sikh element of this EP with its Hindus Valley inspired traditional sound and the softly female spoken word of Nayana Bhandari and Cazeaux O.S.L.O’s arrangements. Due to my lack of understanding about this track’s language, not much more detail can be given.

All in all, this EP is a highly emotive and progressive approach to music and aural tactility. This kind of multi-cultural activity not only broadens opportunities in the musical realm, it helps bring a similar message through different mediums, and create the understanding that despite being difficult to comprehend, there is an underlying common denominator between Hip-Hop, Sikh and Iranian poetry and music, Islamic holy script and the condition of life in Melbourne and the California.

The EP is available to buy via Multicultural Arts Victoria here. Alternatively, the artists can all be found in their individual platforms:

As far as instrumental hip-hop / drum machine goodness is concerned, Amin Payne has been in our focus for more than a year. After featuring his track ‘The World Changes’ on Ethereality Vol.2, we have witnessed the artist move into roots-based territories with his fusion of instrumental hip-hop and traditional ...